I love amaryllis. I mean, who doesn’t, right?

They’re most popular in the winter season, during the lead-up to Christmas, and they’re a common Christmas gift in my family. I’ve been growing them for years, but for the longest time treated them as a one-off plant that was allowed to bloom, live for a time, and then was disposed of.  Looking back I can’t believe how wasteful that was.

It was a few years ago that I first started attempting to keep my amaryllis over and get them to bloom again the following season. It wasn’t as easy as I thought it would be. I had a bit of early success that turned out to be the result of dumb luck, but it took me a few years to really get the process down to a science.  Now, I’m happy to say, I’ve had a few years of great success re-blooming amaryllis.

And so I’m setting my sights on the next logical step: growing them from seed.

I have a number of amaryllis that I put into dormancy one at a time, with the objective of bringing them out of dormancy in a similarly staggered manner. This year I miscalculated and two of my amaryllis ended up blooming simultaneously: an apple blossom and a red lion. 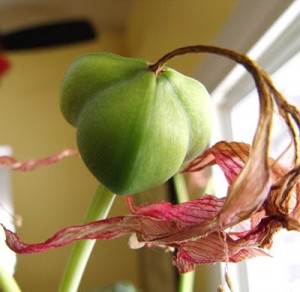 Since they opened within a day of each other, and they’re both such big and beautiful plants, I decided to wiggle my finger inside each flower in turn and spread around a little pollen. I’m just trying to grow from seed, I’m not worried about who pollinated who at this point. As far as I’m concerned, anything that comes out of the resultant cross, or not-cross, has the potential to be a lovely plant.  If I can get them to the flowering stage.

My attempt at pollination appears to have been successful, both plants have produced large, swollen seed pods. I’m now waiting for the seed pods to begin to dry out, at which point they will split open and the seed will be released. I squeeze them gently every day to see if they’re getting close to splitting.

After the seeds are mature enough to be released from the pods, I’ll take them out and check them out. They’ll be small papery things, similar, I think, to the seeds that are produced by gladioluses. The viable ones will have a bump in the centre of them.

I am looking forward to seeing the seeds when they come out of the pods, and seeing what comes of them when they’re grown out. When I go to plant the seeds I will document the process I follow and the results it yields.