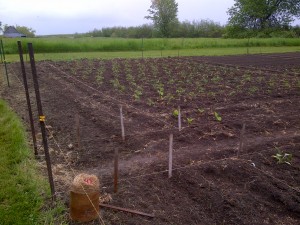 Maplemarsh Farm is located on Amherst Island (which is located in Lake Ontario) west of Kingston, Ontario.  The farm property is 20 beautiful acres on the Third Concession – immediately adjacent to the Sand Beach on the edge of Amherst Bay – of which about 9 acres is marshland.  The marsh is lined, liked the roadside, with mature maple trees.

Before Maplemarsh Farm there was my grandfather’s vegetable garden.  It’s where I first got a taste for growing food.  I can recall as a small child helping my grandfather plant corn and beans and then, after waiting what seemed like an interminable period (note: it still does) going back to harvest the bounty.

My grandfather had been gardening here since they bought the property in the late 1950’s.  In 2013 his health had begun to decline and so he decided to forego a garden for the first time (also, 2012 had been a rough deer-ravaged garden season for him).  It was then that I decided to take over the vegetable garden.

I made it bigger, almost 4 times larger than it had been.  And introduced vegetables that had never been in my grandfather’s repertoire: eggplant, tomatillos, and onions from seed.  It was by far the largest garden I’d ever grown.  And while I’d managed to garden my entire life – where the existence of dirt allowed – it was a challenge; and a joy.  The season ended up being quite successful and the garden produced to excess.

It was in this 2013 season that the idea to start market gardening began to take shape.  It was clear that my grandfather’s health was not going to improve; and that my he and my grandmother would need help.  So I decided to move back to the island full time in early 2014 and left my long-time retail job in the doing.

In 2014 again the garden grew.  This time by double what it was in 2013 so that I was now gardening more than a quarter of an acre.

In 2015 the gardens have ballooned to a full acre, including sweet corn, 10,000 square feet of squash and melons, and 36 different varieties of tomatoes.

Seedling Success – Timing is Everything

It’s that itch, I tell ya, it gets me every time. As soon as the days start getting longer, and the seed catalogues start showing...
Read More "Seedling Success – Timing is Everything"

In the waning days of winter, after the groundhog has chimed in, when the bright sun shines warm on your face, and the warmest days...
Read More "Seed Selection: Three Things to Think About"

#VictoryGarden: What Should You Grow?

How do you decide what to grow?! Well, if you're like me: you don't. You just make more and bigger gardens to fit all the...
Read More "#VictoryGarden: What Should You Grow?"

Site selection and sizing can seem like easy decisions to make when it comes to start a home garden, but how many of us who...
Read More "#VictoryGarden: Site Selection and Sizing"

A quick photo tour of the greenhouses; I snapped some pictures of the growth progress of the seedlings.  The last picture shows how I keep...
Read More "Seedling Roundup – April 20, 2016"

Around this time of year I have what I've come to call water table envy.  What that means is that while everyone else is watching...
Read More "Water Table Envy"

Please fill out the form below to stay up to date on farm information. Subscribers receive periodic email updates detailing what will be available at market or from the farm, recipes ideas, tips for vegetable storage and growing, as well as other helpful information.

Your contact information will never be shared with anyone for any reason; ever.