Well, actually I think it may have started before the 2013 season ended, but I don’t like to tell people that, or else they look at you funny, kind of a mix between the way they look at grandma when she falls asleep at the dinner table and the way a dog’s head tilts when it hears a high pitched noise. I’m doing it right now at myself.

But it’s actually 2014 now, so it’s safe to tell people that you’re planning your 2014 garden. After all, seed catalogues are starting to show up, and they’re kind of like an alibi against the accusations of crazy that go along with seed shopping in January. 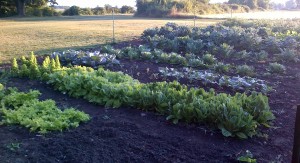 Last year I gardened about 7500 square feet of vegetable garden, and took the year to plan and learn how to grow in a large garden space. I wanted to maximize yields, learn what I could grow in the space, learn what I could handle as far as weeding and watering and tending. I learned a lot. Most of it good, some of it while screaming into the sky.

There were some great successes in 2013, including a humongously bountiful sweetpotato harvest, a never-ending supply of summer squash, hundreds of pounds of tomatoes and as many eggplant as we could use, and more. And, of course, as with any gardener, there were some failures. Or hardships, as I’d rather refer to them. My garden spent a full 16 days in June under 2 inches of water. This caused some of my lettuce seeds to literally float away. It stunted the growth of my potatoes at a time that ended up being crucial to their development and resulted tiny gajillions of tiny potatoes. The wet also kept me out of the garden for too long, and it allowed weeds to grow up between my onions and beets and carrots; and I never really got that under control for the rest of the season.

But all things considered, I think 2013 was a success. And 2014 will be more of a success, ground willing.

There are things I’ve learned: don’t be afraid of the mud, getting the weeds out is more important than keep my jeans clean. The high water table means that the garden will collect water, so allowances need to be made (2014’s plan is to try a ditch of sorts around the perimeter of the garden). And I think this year I’ll have a better handle on how much of what to plant and when.

And that’s the main thing that I’m aiming for with 2014: getting a better handle on the when and how much of garden harvests. I want to succession plant, choose cultivars for early, mid-season and late harvest, and cultivars for eating fresh and for storage. The garden is bigger this year than last, but I think the size will be easily handled given what I learned in 2013. Now I really want to be able to know that I will have X amount of Y produce out of the garden on week Z…