It’s the middle of August and the elderberries are starting to ripen.  This summer in Ontario has been quite dry and you can see it’s had an impact on the berries.  They’re much smaller this year than they were last year; which of course was an above-average year for moisture.  Their flavour, however, seems to be just as good as in past years in spite of the small size.

I have been an elderberry aficionado for a long time, though until a few years ago my mainstay way of enjoying them was just to eat them directly from the bushes as I passed by.  It was the urging of my grandmother that eventually lead me, last year, to collecting enough of the berries for a couple of pies.

The berries that grow around my family’s farm on Amherst Island in Lake Ontario are a wild variety that grow prolifically along the edges of the marshes.  The bushes grow very well in the nearly-always-wet soil of the low-lying land that makes up the margins of the property; sometimes reaching heights of 16-18 feet.  The berries are very dark purple, almost black when ripe and have a nice tart taste that, when sweetened and used in a pie or tart filling, reminds me of raspberries (another of my wild favourites).

Be careful when using elderberries in your cooking because all parts of the plant other than the ripe berries are toxic and may be poisonous if consumed in high enough quantities.  I have heard recommendations, even, that small children shouldn’t even be allowed to handle the wood or leaves from the plants due to this toxicity, although I’m not sure how serious a risk this is.  Careful is always better, I guess.

If you have the chance to try some wild elderberries and make yourself an elderberry pie.  Here’s my grandmother’s recipe for the filling… it’s pretty simple:

Pour into the uncooked pie crust and cover with another layer of pastry.  Bake at 450 for about 15 minutes, then reduce heat to 335 and cook for another 45 minutes to an hour until done.  Serve with vanilla ice cream. 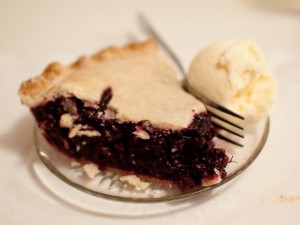